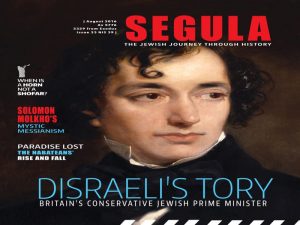 One of Victorian England’s more flamboyant politicians, Benjamin Disraeli was baptized as a child but remained proud of his Sephardic Jewish origins. His sharp wit, social grace, and centrist politics made him a role model for aspiring Jews

The product of two worlds, New Christian Diogo Pires secretly delved into Jewish mysticism even as he rose through the ranks of Portuguese society. Then a visitor from the kingdom of the ten lost tribes of Israel tipped him over into outright messianism, and all was lost

When is a shofar not a ram’s horn, and when can it be heard besides this time of year? The answer lies in Djerba and Yemen

Lords of the Desert // Tamar Hayardeni

After dominating the desert landscape of the Middle East and controlling the immensely profitable Incense Route for almost thirteen hundred years, the Nabateans and their fabled wealth disappeared into the shifting sands. What brought down the civilization that could urbanize the wilderness?

A Day in the Museum

For Jewish underground fighters exiled to Africa, the British mail service was their only connection to home – a fact their captors swiftly exploited