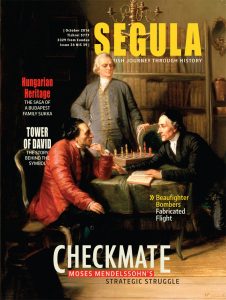 Moses Mendelssohn was one of the first Jews to wrestle with living in two worlds. Though battered time and again by anti-Semitism, his faith in the Enlightenment remained as firm as his attachment to Judaism

Up Against the Wall // Sara Jo Ben-Zvi

Spanning numerous countries and generations, the remarkable odyssey of Arye Steinberger’s sukka art mirrors that of the Jewish people. Both have survived against all odds

In a daring smuggling operation right out of Hollywood, four bombers arrived in Israel just in time to make a crucial contribution to its War of Independence. There was even a film script involved, featuring a seasoned Jewish pilot and a New Zealand beauty

Behind the Symbol // Itamar Brenner

For centuries, the thrusting turret of David’s Citadel has been synonymous with Jerusalem. But what’s the history of the building itself? After years of neglecting its own story, the Tower of David Museum has finally reclaimed its premises’ past

All Because of a Horseshoe Nail // Yochai Ben-Gedalya

Billed by circuses as a modern-day Samson and the strongest man alive, Zishe Breitbart openly declared himself a Jew. Yet his legendary strength failed him when tragedy struck