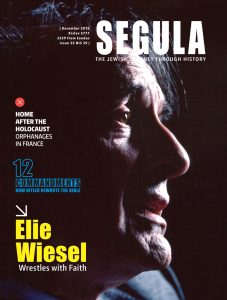 Prof. Elie Wiesel was perhaps the world’s most famous Holocaust survivor and scholar. Friend and colleague Dr. Yoel Rappel returns to this Nobel laureate’s roots in the Romanian shtetl to review a lifetime of activism that sprang from the Holocaust – and defied it

Eli Wiesel’s story is just one example of the incredible transition made by Holocaust survivors. The dedicated staff at the various “children’s homes” in which he was placed made more of an impression than the idyllic setting as he rebuilt his life

In the early 1960s, Eli Wiesel paid his first visit to Rabbi Menahem Mendel Schneerson, the Lubavitcher Rebbe. Their private audience lasted deep into the night. “Winter,” the fourth and final section of Wiesel’s The Gates of the Forest (1966), recaps that stormy confrontation. The novel’s protagonist, Gregor, represents the author, sparring verbally with the Rebbe as the biblical Jacob wrestled with the angel

Why destroy the Jews? Published as early as 1939, the pocket-size Conversations with Hitler revealed the Führer’s nihilistic vision – so antithetical to Jewish ethics that its adherents had to be eliminated

God in His Chariot // Itamar Atzmon

The mystery of a divine figure seated on a winged chariot, depicted on coins from the Persian province of Judea, has puzzled scholars for over two hundred years. Who produced it and why?