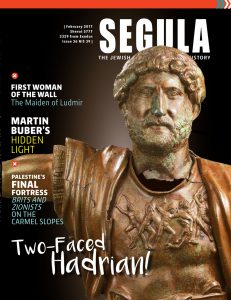 In Jewish tradition, he was one of the most ruthless tyrants who ever rose up to destroy us, but to the millions of other nationals under his sway, he was considered one of the best and most just of all Roman emperors. Who was the real Hadrian – the cruel despot who crushed the Bar Kokhba Revolt, or the man who spread the Pax Romana to the ends of his empire?

Martin Buber’s search for meaningful dialogue sought to bridge the gaps between Arabs and Jews, among others. Perhaps that’s one reason he hasn’t received his due – until today

As one Nazi victory after another along the Mediterranean coast made an attack on British Mandate Palestine increasingly likely, bunkers and trenches were dug in line with the Carmel mountain range to block Hitler’s advance south from Syria

Draped in tallit and tefillin, she stood in the heart of the Old City, preaching to men and women alike. No Reform rabbi or “Woman of the Wall,” the mysterious Maiden of Ludmir was a respected figure in Jerusalem’s 19th-century ultra-Orthodox community

Birth of a General // Yochai Ben-Gedalya

German-born David Sealtiel, the IDF’s first general, was also one of Israel’s first ambassadors. He put his intelligence-gathering skills to good use, unearthing his family’s roots in London and Amsterdam