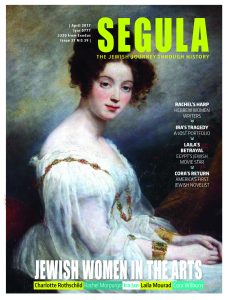 The first modern Hebrew writers were mostly young, educated, secular, European – and male. Yet despite the barriers of gender and education, a few women also published in Hebrew in Enlightenment journals. Their profile, however, was almost as different as could be from that of the men. Who were these female authors, and what became of them?

Ira Jan’s worth is truly beyond measure, since almost her entire portfolio – that of arguably the first female professional Jewish artist – has been either lost or stolen. Her letters to Bialik were likewise suppressed to protect his reputation, leaving all too little of this tragic early Zionist painter

Jewish Egyptian pin-up Leila Mourad claimed her conversion to Islam was sincere, but with Egypt struggling to wipe the State of Israel off the map, she had little choice if she wanted to further her career

Who’s ever heard of Cora Wilburn, the first Jewish novelist in America? At nineteen, she’d traveled the world and disdained its corruption. Clawing her way out of poverty as the Civil War divided the United States, she used her pen to fight for women’s rights, abolition, and her own freedom to rejoin the Jewish people

Like most of his fellow Jews, Italy’s modern-day Maimonides was a loyal proponent of the monarchy, failing to see the dangers of the rising tide of Fascism until he became its victim