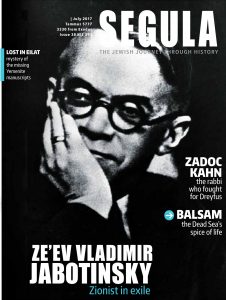 Ultimate visionary and despicable rival, forged in his native Odessa but focused on the Promised Land, Ze’ev Vladimir Jabotinsky was unique – and an outsider – among Zionist leaders. Forty years have passed since his heirs brought his liberal economics and complex politics into Israeli government. A life

Witness for the Defense // Tamar Hayardeni

Rabbi Zadoc Kahn stood firm against the rising tide of French anti-Semitism following the Dreyfus trial. Accomplished philosopher and fearless Zionist, Kahn was proud to count among his friends not only Baron Rothschild, but France’s most notorious “traitor”

Its price was well above rubies, and bloodshed, sex, and power followed in its wake. No more than a desert shrub, Jericho’s balsam was coveted by some of the biggest names in antiquity

We Were the Future: A Memoir of the Kibbutz, Yael Neeman // Elka Weber