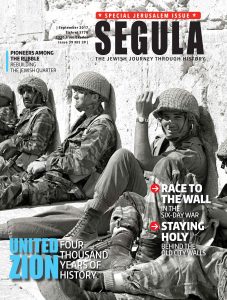 Why was the 1967 battle for Jerusalem so different from the way it was planned? Was the heroic capture of Ammunition Hill unnecessary? And why did General Uzi Narkiss tell IDF chief rabbi Shlomo Goren to bring a shofar into battle? The generals of 1948 had all the answers

As neighborhoods developed outside the Old City, Jerusalem’s ancient wall lost its  protective significance and came to symbolize the local Jewish community’s spiritual, social, and cultural conservatism in the face of modernity

Fact and fiction intertwine in the tale of the Tiferet Israel synagogue, in Jerusalem’s Old City, which tipped its hat to Austria’s Kaiser Franz Joseph

With the reunification of Jerusalem, Jews could once again dwell in the Old City. But Jordanian occupation had destroyed the Jewish Quarter, and rebuilding the ruins required funding and organization on a national scale. A young group of soldiers – backed by an enthusiastic Israeli public – rose to the challenge

Paving the Past // Assaf Avraham

If Jewish sources are anything to go by, Herod’s Temple in Jerusalem was one of the most magnificent edifices ever built. After years of painstaking archaeological research, sifting through rubble illegally removed from the Temple Mount, we can now reconstruct the tiled floor of the Temple courtyard and judge whether – at least at ground level – the sages were right

Reporting to the French consistory on his1854 visit to the Holy Land, Dr. Albert Cohn is both supportive and patronizing, reflecting European Jews’ attitude toward their coreligionists in the Middle East

Coins minted in the city