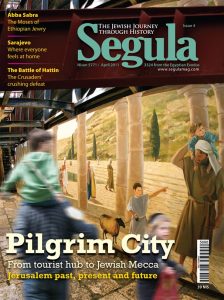 As we follow at the footsteps of the Second Temple period pilgrims, the archeological remains of ancient Jerusalem bring their experience vividly to life. The vibrant pageant of the pilgrims’ progress

How would Jerusalem, already congested at the holiday season, cope with a massive influx of pilgrims were the Temple rebuilt? A think-tank using models of urban city planning and the Saudi Arabians’ arrangements for the Haj is currently hard at work

The battle of Hattin was the deciding round in the struggle between Saracens and Crusaders for control of the Holy Land. The battle of 1187 was not the first waged between Saladin and the Crusader army in that region. It was preceded by two campaigns, in one of which the actions of the Crusaders – and the outcome of battle – were very different. This undermines the prevalent theory blaming the Crusaders’ defeat on their role as conquerors of the Holy Land

What kind of Jewish identity can survive in a community open to anyone who comes knocking at the door? The heroic example of the Jewish community center in  a Sarajevo torn by civil war gave the community a new lease of life – which may yet prove to be its undoing

Abona Abba Sabra was the “Moses” figure of Ethiopian Jewry, saving the community from almost certain spiritual annihilation in the 15th century. Their fate lurching from dominion to servitude, constantly threatened by the expanding Ethiopian church, Ethiopian Jews owe their definitive identity to this remarkable monk

Cooking Up the Past // Hadassah Assouline