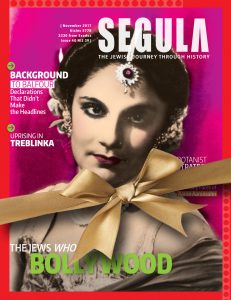 While the Balfour Declaration is famous as the first major step toward creating a modern Jewish homeland in the land of Israel, the groundwork was laid centuries earlier, gaining momentum with the approach of World War I

Aaron Aaronsohn had two loves – botany and Zion – and was ahead of his time in both. But while his discovery of primeval wheat brought him worldwide recognition, his decision to help the British conquer Ottoman Palestine was roundly criticized, though it led to the Balfour Declaration

The silver screen wasn’t considered suitable employment for Indian women, but it catapulted some members of the tiny Jewish minority in Kalkota, Bombay, and Pune to stardom

Few have heard of the Treblinka uprising, perhaps because the camp commanders pretended it never happened. Yet dozens of Jews who’d taken up arms against their murderers survived, a living testimony to the stubborn struggle against the ultimate evil

On the Balfour Bandwagon // Gil Weissblei

Zionism and Serbian nationalism connected at a historic crossroads after World War I, when a Serbian Jewish doctor’s efforts resulted in the first international recognition of the Balfour Declaration