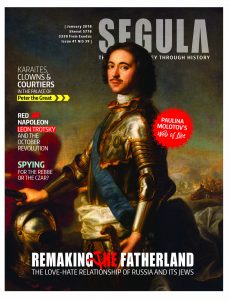 In the Service of the Czar // Irena Vladimirsky

The St. Petersburg police chief, a Russian diplomat, and a comedian all sit down together at the Seder… It sounds like a joke, but Peter the Great may well have attended such a gathering, for Jews were surprisingly crucial in his court

One secret to Russia’s victory over hitherto undefeated Napoleon Bonaparte was superior military intelligence, thanks largely to a spy ring orchestrated by the founder of Lubavitch Hasidism, Rabbi Schneur Zalman of Liadi

Born a Jew and murdered as one, but with precious little Jewish identity in between, Leon Trotsky was a driving force behind Russia’s Communist revolution. Though Lenin was its intellectual and military mastermind, Trotsky was his faithful henchman, equally convinced that mass violence was the key to its success

Arguably once the most powerful woman in the Kremlin, Paulina Molotov remained faithful to Stalin even after he betrayed her. What fatal misstep exposed her long-concealed Jewishness?

Behind the Iron Curtain, cut off from the world and from Judaism, refuseniks fanned the forbidden flames of a cultural revival with dramas celebrating heroic legends of Jewish self-sacrifice

The Russian Empire’s dramatic fall in 1917 was surprisingly good for the Jews, giving them civil rights, equality, and even autonomy. But anti-Semitism soon turned back the clock