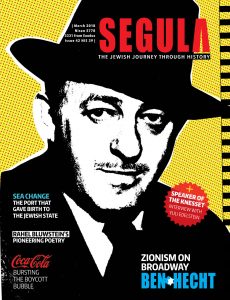 What made Hollywood’s favorite screenwriter work for the Zionist underground? Was it Ben Hecht’s warm heart, his stormy personality, his shocking discovery of Nazi atrocities – or all three combined? In any case, the resulting production inspired the America to come to the aid of postwar Jewish refugees in Europe

The euphoria surrounding the dedication of Tel Aviv’s harbor might have seemed excessive, but this first modern Jewish port symbolized the rebirth of the nation

When the delicate young woman stepped off the boat in Jaffa and swore never to leave the land of Israel, no one could have dreamt how great her influence on Israeli culture was to be. Her name was Rachel Blubstein, but she soon became known simply as Rachel – whose lyrical, melancholy, and wholly personal verse has spoken to generations

The Boycott That Fizzled // Tehila Bigman

Coca-Cola is the world’s best-known carbonated beverage, but until the late 1960s you couldn’t buy it in Israel. Despite repeated assertions that they didn’t care about the Arab boycott, Coke’s manufacturers refused to export to the young Jewish state

A Widow in Print // Channa Lockshin-Bob

From Ghetto to Zion by Ephraim Moses Lilien // Naomi Samuel