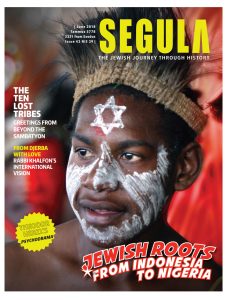 Writing The New Ghetto clearly changed Theodor Herzl. Could this forgotten play have been the crucible that forged The Jewish State?

The riddle of Israel’s Ten Lost Tribes periodically reignites the collective Jewish consciousness, only to fade back into obscurity. Why was the 15th century one such moment, and how do the Jews of Ethiopia fit in?

In every corner of the globe, people are embracing Judaism. Are they lost tribes of Israel, truth seekers, or simply looking to improve their living standards? Firsthand impressions from Kurdistan to Manipur

No Man an Island // Hezi Cohen

Even before World War I tore the world apart, Rabbi Khalfon Moshe Hakohen dreamt of universal peace administered by a league of nations. As the rabbi of Djerba, Hakohen ushered the Jewish community of this isolated North African island into a brave new world, wary of secularism but embracing Zionism

A Russian aristocrat and a Jew? Yakov Polyakov was a rare breed. Luckily for us, this fascinating figure also kept a diary

From the Life? or Theater? series by Charlotte Salomon // Naomi Samuel