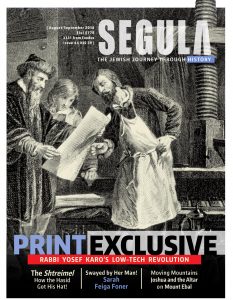 Growing up in the wake of the invention of the printing press and in the shadow of the expulsion from Spain, Rabbi Yosef Karo dreamed of a code of Jewish law that could reach all his scattered people – and unite them

Shtreimel Variations: The History of a Hat // Levi Cooper

Though synonymous with Hasidic Jewry, the shtreimel was originally more of a status symbol than a religious one. And not only for Jews, or for men, for that matter

Hidden high on the slopes of Jabal Aybal in Samaria, a heap of rocks, bones, and ashes waited millennia for an archaeologist willing to risk his reputation just to tell its story

As if writing the first Hebrew novel by a woman weren’t challenge enough, Sarah Feiga Foner found herself criticized, ridiculed, and even accused of promiscuity. Her work may have been forgotten, but her story is one to remember

Documents from the Cairo Geniza reveal the complications involved when a slavewoman married into the Jewish people. Was it Jewish law, class snobbery, or greed that blocked her acceptance?