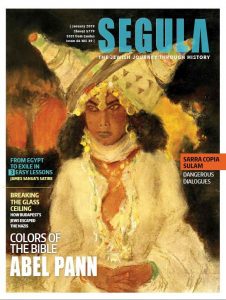 Banished from Egypt time and again for promoting nationalism and exposing government corruption, James Sanua harnessed humor and drama to continue jabbing at the regime from afar. Soon his satirical journal’s popularity outstripped even that of the theater he’d founded in Cairo

As World War II drew to a close and the Nazis prepared to send Budapest’s Jews to their deaths, salvation appeared in the curious form of a glass warehouse , a Zionist, foreign diplomats, and sheer hutzpa

She enchanted famous authors and Jewish historians alike, and her poems are esteemed by Italian literary critics to this day. Yet Sarra Copia Sulam’s life story remains obscure, and relatively few of the young Venetian Jewess’ writings have survived

Though he could easily have continued exhibiting in Paris’ most exclusive galleries alongside his illustrious contemporaries, Abel Pann followed the pull of Zionism instead. Against the romantic backdrop of picturesque Palestine, he embarked upon his greatest project – illustrating the Bible in the land where it all began

Hot off the Press – Quick looks at books // Elka Weber

The hanging of Betar activist Shlomo Ben Yossef shocked London’s Jews, but one newspaper was particularly outspoken in its criticism. How a French Jewish journal in London challenged the moral compass of British colonial rule in 1930s Mandatory Palestine

The Rabbi and His Grandchild by Mark Gertler // Naomi Samuel