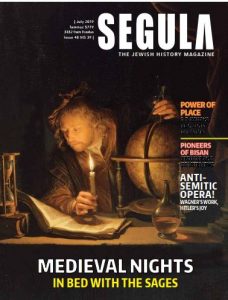 Though sleep and sex are hardly the stuff of history, a surprising amount can be gleaned from rabbinic responsa dealing with medieval Jewish sleeping habits. With candlelight at a premium, what were Jews up to at night?

For a few brief decades, Jews and Arabs lived side by side wherever immigrants arriving in the Holy Land chose to settle as a minority among Muslims. Was the tiny Jewish enclave of Bisan a hopeless case or a model community? Either way, what wiped it off the map?

Jewish refugees were delighted to reach the new State of Israel, but almost all the sites sacred to them lay beyond its narrow borders. So the director of the Religious Affairs Ministry promptly created new pilgrimage destinations, some ancient, others unexpected

The proud owner of Wagner’s original opera scores, Adolf Hitler even modeled his own suicide on the one depicted in the composer’s Ring cycle. But did the music festival and supporting associations founded by Wagner really shape the horrors of the Third Reich?

A wartime cookbook shows how to feed the family without resorting to the black market. Recipes included! // Hila Cohen

Voices of the Past

The Legend of the Holy Ashes // S. Z. Kahane