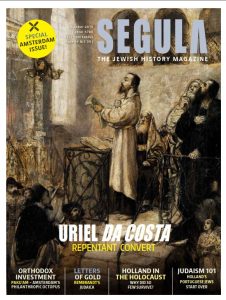 The Price of Dissent // Moti Benmelech

Uriel da Costa paid many times over for the changes he made in his life. He sacrificed a comfortable livelihood in Portugal for the true faith he found in the Bible, only to run afoul of its followers in Amsterdam

Can a community transform itself in just one
generation? Much like today’s newly observant Jews,
Amsterdam’s Portuguese ex-conversos embraced
Judaism with enthusiasm but little knowledge. Yet soon
their leaders, literature, and schooling were the envy of
more established Jewish centers. How did they do it?

Glowing Hebrew characters brighten some of Rembrandt’s most famous paintings. A far cry from the incidental Hebrew of his early work, this masterful touch reflects the cultural interchange between Jews and Christians in Renaissance Amsterdam

From Amsterdam with Love // Yochai Ben-Ghedalia

Though Anne Frank’s story has bolstered the Netherlands’ reputation for protecting its Jews, the Dutch informants who betrayed her were as typical of Holocaust Holland as the brave souls who harbored
Jewish families

A Brief History of Amsterdam

A biography of Menasseh ben Israel