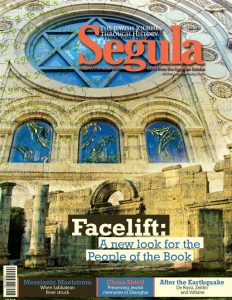 The synergy between Nathan of Gaza, a charismatic young genius, and Shabbetai Tzvi, a complex, troubled personality, led to a dramatic upheaval among the Jewish people. A glimpse into the unbelievable Sabbatean story

Can five years create a heritage worth preserving? Twenty-thousand Jewish refugees found shelter in Shanghai’s Hongkuo District during World War II, and then departed, almost without trace. Today the shingled rooftops of Hongkuo stand squarely in the path of relentlessly advancing  skyscrapers, a  silent, humble reminder of China’s  past courage and  generosity. To preserve or not to preserve? Not an easy question.

Renaissance-era Italian rabbis condemned it, Rabbi Yosef Karo recommended burning it, and Maharal of Prague attacked it. To Enlightenment thinkers, however, Meor Einayim was a masterpiece. Yet its author, Azariah Dei Rossi [or de Rossi?], was a traditional, perhaps even conservative Jew, and the issues that concerned him – such as intellectual openness and the veracity of rabbinic legend – remain with us to this day

The Jewish leaders who returned to Zion from the Babylonian exile laid the foundations for a new Judaism, in which prayer replaced prophecy, a new covenant replicated the one sealed at Sinai, and a halakhic system safeguarded the commandments. Anshei Knesset Ha-gedola, or the Men of the Great Assembly, left an indelible mark, even if they never actually existed as an institution

1896. Two sisters, just back from Cairo, show Solomon Schechter a bundle of tattered manuscripts. The result is the discovery of the Cairo Geniza and its wholesale transfer to Cambridge University. But that’s only part of the story. Enter Solomon Wertheimer, a young Talmud scholar from Jerusalem and the first to unlock the secrets of the Geniza fragments