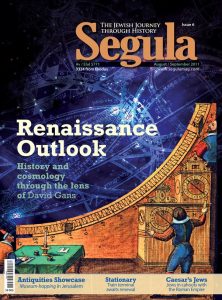 As the scientific and religious boundaries of the Middle Ages began to give way, David Gans explored both the Kabbala of Maharal and the new cosmology of Tycho Brahe with an eagerness befitting only a Renaissance Jew

Gans’  eager curiosity made him as avid a historian as he was astronomer. His version of “A Short History of Almost Everything” encompasses the great discoveries and upheavals of his age

Steadfast in the face of bandits and rioting mobs, the Jerusalem Guard stood vigilant in defense of Jewish lives and property before the earliest Zionist militias were even a whisper on the wind

The first railway track that pulled into Jerusalem was greeted with a wave of enthusiasm and high hopes that it would pull the city with it into the age of enlightenment. High hopes and great potential, but disappointing in the long run. The jury is still out on train to Jerusalem

The relentless cruelty with which the Roman legions crushed the rebellion of Judea was one of the tools which soldered their empire together. But among their ranks marched Jews, whose excesses in the service of Rome against their own people served chiefly to accelerate their own advancement

The Roman commander who fought on the walls of Jerusalem at Titus’ side was the scion of a well-connected Judeo-Roman family, with ties to the last descendants of the Hasmoneans. In the words of the prophet Isaiah, “Your destroyers … shall come forth from within you”

In for a Penny // Itamar Atzmon

How did hundreds of thousands of tiny Hasmonean coins, all of very low value, find their way to the bottom of the Dead Sea? Might this suggest King Alexander Jannai had problems paying his mercenaries? Or is there something more complex here at work?

The Register of Blood // Hadassah Assulin

On the last page of minutes in the register of the Talmud Torah Society, Uri Finkel found the signatures of members of his own family. On the blank pages remaining, he wrote the story of the extermination of Rakov’s Jewish community, the last chapter in a hundred years of local Jewish history