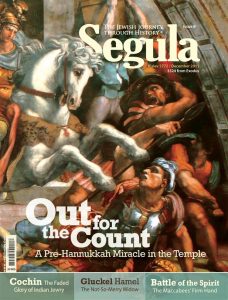 Ethnic discrimination runs like an ugly thread throughout the history of the Jews of Cochin – from the rivalry between the light-skinned Paradesi and the slightly darker Malabari, to the supposedly bureaucratic delays that held up their emigration to Israel

What makes a middle-aged woman’s diary into a source of inspiration for generations of Jewish women? Why did Gluckel Hamel’s diary endure the test of time? Was it just happenstance, or was it the depth of her resolve and the steadfastness of her faith that lent her words longevity?

The war Mattathias and his sons fought against Hellenism was perhaps even more formidable than their armed conflict against the Greeks. The religious reforms they enacted testify to their determination to prevent the cultural assimilation of the Jewish people, and to the proud, independent spirit of the kingdom they hoped to found

The Coin That Never Was // Itamar Atzmon

Rumors and scholarly speculation alike have fueled the search for coins minted by Simon, the first Hasmonean ruler and the brother of Judah Maccabee. Archeological efforts have so far produced mainly false leads and scholarly disputes

Divorce between Latvia and Siberia in the 19th c. in Russia