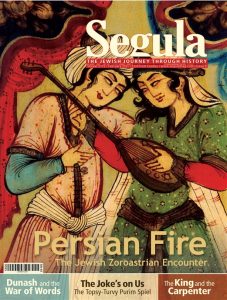 An annual outlet for the pressure cooker of the medieval Jewish community, the Purim spiel subtly subverts the power structures of Jewish society, making a mockery of their authority

Why We Eat Hamentashen // Shmil Holland

How did the traditional Purim pastries originating in Eastern Europe become associated with the festival? And how did Haman’s ears end up in his pocket-book?

The Fire of Faith // Shai Secunda

In the Persian empire of the book of Esther, it was the Gnostic fire-worship of the Zoroastrian faith that reigned supreme. The meeting of Persian and Jewish cultures generated mutual influences, as well as the sparks of confrontation

A War of Words // Ari Geiger

Far from the gentle poet of contemporary imagination, Dunash’s pen was mightier than a sword and its sting more venomous than a snake-bite. The prizes at stake were fame and fortune, and the battlefield – the field of Hebrew grammar

A Jordanian king dreams of the perfect parquet, but it takes a Jewish carpenter from Jerusalem to make it happen. While Arab riots raged in Palestine, royal limousines whisked Mendel Cohen to work in King Abdullah’s palaces

Herod: The Man Who had to Be King, Yehuda Shulewitz // Elka Weber

This blithely written book presents Jerusalem as the home of all monotheistic faiths, disregarding the unique bond between Jews and their ancient capital

Where There Are No Trees… // Moshe Haim Shapira

The remains of the forests in the Land of Israel

The Attitude in Latitude // Moti Passal