The Pledge on the Mountain

For generations, the Jews of Ethiopia renewed God’s covenant with an annual pilgrimage to a sacred mountain. What remains of that ritual in Israel today? | Liat Josefsberg Ben-Yehoshua

Etthiopia, on the eve of 29 Heshvan. From widely scattered villages, Jews flock to the foot of a designated mountain. Purified by bathing in the nearby river, after seven days of abstinence and no contact with non-Jews, they will dedicate the following day to fasting and prayer. This is Sigd, the pilgrimage holiday unique to Ethiopian Jewry. 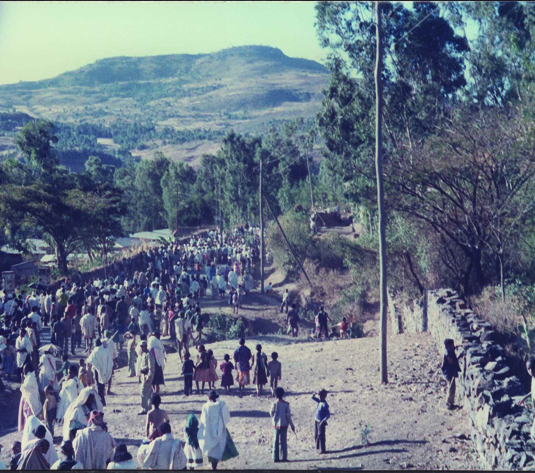 Courtesy of the Central Zionist Archives

Rare photos of Sigd ceremonies in Ethiopia, showing a procession on its way up the mountain

Sigd begins with a long procession. Dressed in white, led by priests bearing sunshades, Jewish villagers ascend the mountain. First in line are priests carrying the books of the Orit, the Torah in the Ethiopian language of Amharic, which are laid carefully in a sanctified area draped in white cloth and meant to resemble the Temple’s Holy of Holies. The shrine has been prepared by villagers a week in advance. Now, bearing stones on their heads as a sign of humility, they follow the priests up the mountain together with the rest of the community. On the mountaintop, a priest reads the verses from the book of Exodus describing the revelation at Mount Sinai, including the Ten Commandments, and the book of Nehemiah’s account of the renewal of that covenant in Jerusalem after the exiles’ return from Babylonia. He addresses the entire community, men and women alike. The verses are proclaimed in Ge’ez, the language of all Ethiopian holy books, and then translated into Amharic. 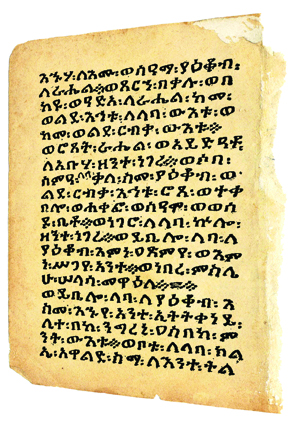 Text from the book of Genesis written in Ge’ez. By the beginning of the 11th century, this sacred language was no longer spoken

Sigd was celebrated in different locations around Ethiopia, with each cluster of villages selecting its own mountain. Hills with burial complexes or buildings sacred to other religions could not be used, while significant sites in the lives of founding leaders of the Beta Israel community – as Ethiopian Jewry is known – were favored. Thus, four of the mountains selected were way stations for Abba Sabra and Saga Amlak as they fled the vengeful Emperor Zara Yaqob in the 16th century (see “Abba Sabra, the Founding Father,” Segula 4). 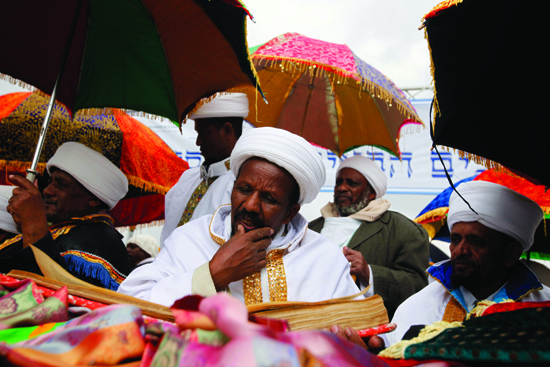 : The kess translates the text of the holy Orit from Ge’ez to Amharic, since most of the assembled don’t understand the ancient tongue

The ceremony ends with a sermon delivered by the kess, the high priest, after which the crowd sings and dances its way down the mountain, carrying the Orit books back to the village synagogue. The fast is broken with a festive meal of beef slaughtered the previous evening, and the following day is devoted to socializing and consultations among the elders. Other Sigd customs include collecting charity for priestly use, and an Amen ceremony, in which wheat is scattered on the sacred ground, prayers are said, and the names of deceased members of the congregation are pronounced. 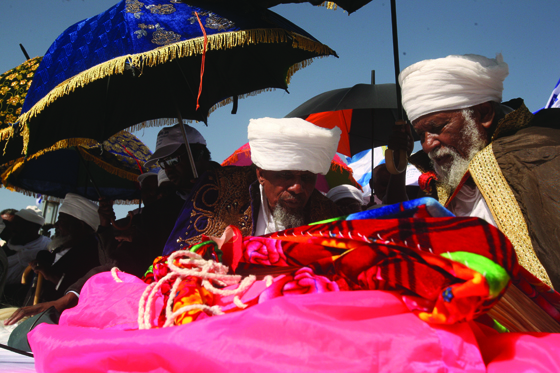 Each kess sews and embroiders his own colorful robes

The name Sigd comes from the Hebrew word segida, denoting worshipful prostration before God. The holiday is also known as Mehlella, “supplication.” Its origins are mysterious. Several hypotheses link the pilgrimage to ancient historical events – the destruction of the First Temple, or the revelation at Sinai. Alternatively, the day may be a tribute to Jeremiah the prophet. A more locally based tradition suggests that Sigd was a day of prayer entreating God to protect the Beta Israel from tyrannical Ethiopian rulers. In that case, the holiday would date back to the “years of survival,” the black days of Christian persecution of Ethiopian Jewry, culminating in the 15th century. This theory would also explain the custom of carrying stones up the mountain, symbolizing the submission of kings and leaders before a conqueror.

Clearly, the renewal of the Jewish nation’s covenant with God plays a central part in the festivities. Many of the rituals echo the ceremony held at the time of Ezra and Nehemiah. And Sigd’s mountaintop setting signifies purity and the wish to return to Zion, the hilltop city of Jerusalem, as well as recalling Mount Sinai.

In Israel, the holiday is also known as the “Festival of Yearning for Zion.” This motif probably developed as part of a 19th-century attempt to connect the Beta Israel with world Jewry. Since then, Jerusalem, always one of Sigd’s most powerful symbols, has dominated the day’s prayers. 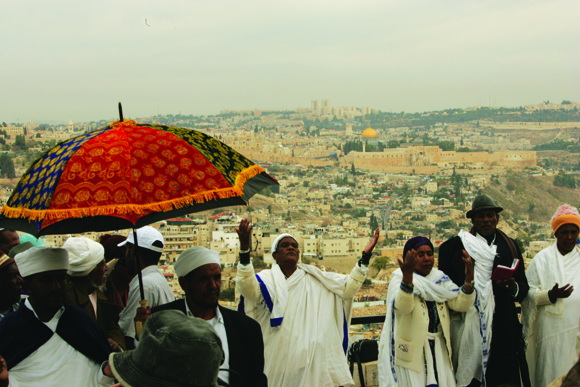 Praying for Jerusalem, in Jerusalem. Members of the Beta Israel celebrate Sigd, their backs to the Temple Mount

From the Heart of Jerusalem

The Ethiopian Jews who historically prayed and fasted on this day dreamed of coming home to the land of Israel. Sigd’s unique prayers express a deep desire to return to Jerusalem and rebuild the Holy Temple: 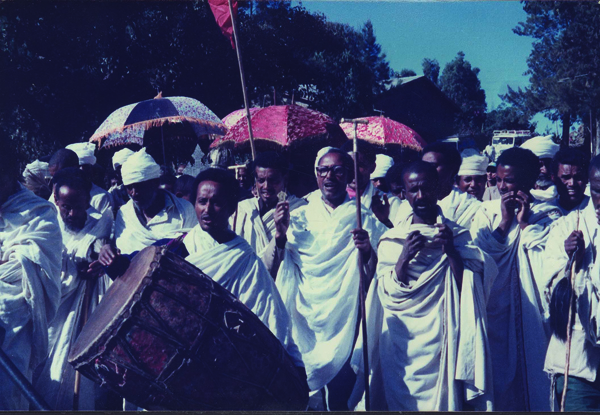 Courtesy of the Central Zionist Archives

Rare photos of Sigd ceremonies in Ethiopia, showing a procession on its way up the mountain

When tens of thousands of Ethiopian Jews arrived in Israel in the 1980s, Sigd celebrations began here. It was only natural that instead of selecting just any hilltop, the festival should be celebrated in Jerusalem itself – the city these Jews had longed for and prayed toward throughout the generations. 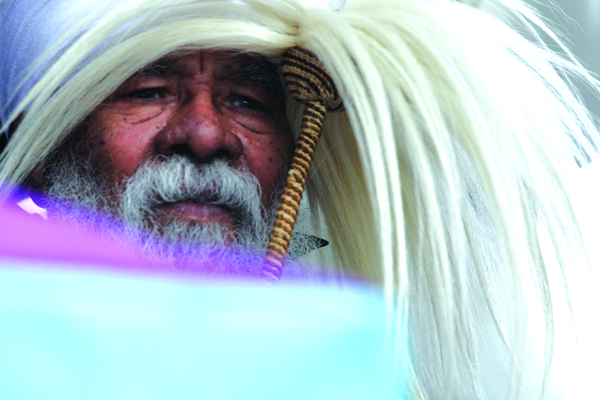 Yet there were doubts about continuing the holiday in Israel. Was it really necessary, now that the Ethiopians had reached the city of their dreams? Some feared that public celebrations would sabotage secret aliya initiatives in the future, such as Operation Moses in Ethiopia. Others preferred to downplay the differences between the Beta Israel and the rest of the Jewish world. As a result, Sigd festivities during the community’s first years in the Jewish state were very modest.

The holiday was first celebrated in Israel in 1980, at the Western Wall. Larger crowds attended the following year, although the ceremony was moved to Mount Carmel at the last minute. The change caused tremendous disappointment, particularly when participants discovered a church on the mountain, in direct violation of their ancient tradition. A small Sigd celebration held that same year in Jerusalem began at Mount Scopus and ended at the Western Wall.

Members of the Beta Israel community from Gondar chose Mount Zion as the venue for the 1982 Sigd festivities, with the support of the Jewish Agency and the Chief Rabbinate. The well-attended ceremony was given official sanction by the presence of President Yitzhak Navon and Chief Rabbi Shlomo Goren as well as Ethiopian kessim.

Debate raged in the community over the next two years, with many arguing that the holiday would become irrelevant once they were all in Israel. The final decision was to continue celebrating Sigd.

In 1984 the ceremony was held in the Jerusalem neighborhood of Armon Hanetziv, although it was overshadowed by tension caused by the Chief Rabbinate’s decision to have the entire community undergo conversion, and by strife between two groups within the Beta Israel – those from Tigray and those from Gondar.

The fact that Sigd celebrations are held at one central location in Israel, and attended by all kessim, is a dramatic deviation from tradition. Yet this unity enhances the festivities and transforms them into Ethiopian Jewry’s main yearly event. The ceremony still takes place in Armon Hanetziv, overlooking the Temple Mount.

Why did community leaders move the proceedings from the Western Wall? Perhaps to maintain the holiday’s traditional setting – if not on a tall mountain, at least on a point high above much of the city. Holding the ceremony at a certain remove from the holiest of places might also preserve the yearning that, in Ethiopia, was the essence of the day.

The Beta Israel’s preference of Armon Hanetziv over the Western Wall may indicate that these Jews have not yet reached the Jerusalem they longed for. Their difficult transition and lack of acceptance within Israeli society make it hard for them to celebrate their return to the land of Israel wholeheartedly. A poem by Kobi Zana, who emigrated from Ethiopia to Israel as a young boy, expresses this sentiment: 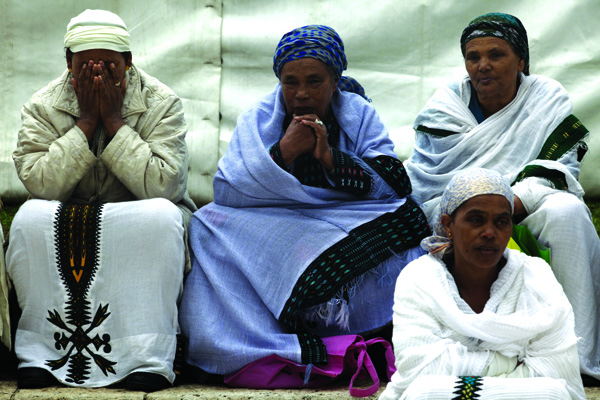 Women praying at the Sigd ceremony in Armon Hanetziv