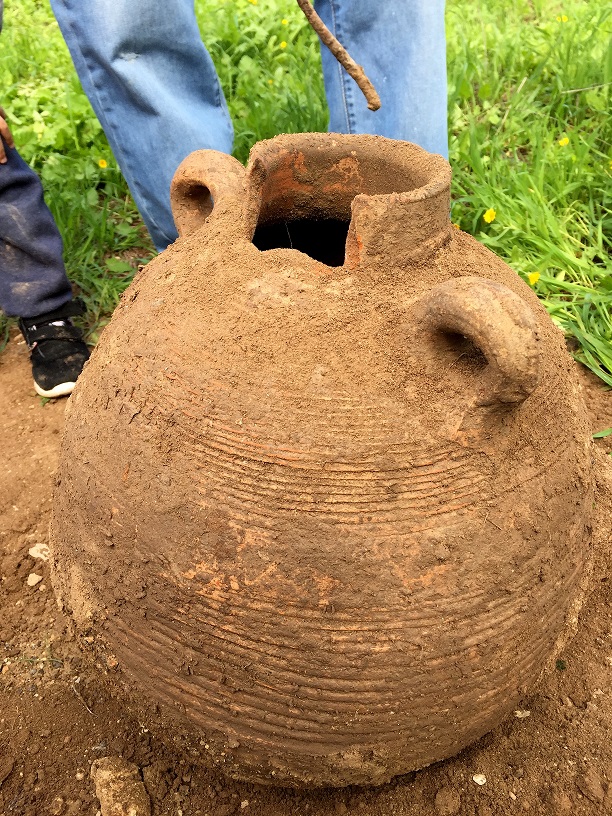 Two families out trekking after last week’s heavy rains, near the Harod stream in Beth Shean national park, came across a complete Byzantine storage jar. Stopping to rest on sloping ground, the Armon and Avidor families noticed something sticking out of the ground.

“We saw a kind of “ear-shape” – a clay handle – poking up from the earth, and were amazed and excited to discover an unbroken storage jar, well-shaped and heavy. We’ve always been interested in archaeology, and we’d been reading the signs along the route which mentioned that clay pots had previously been discovered around here – and now we were lucky enough to find one ourselves, from fifteen hundred years ago,” recalled Tamar Armon.

The two families immediately reported their find  to the Israel Antiquities Authority (IAA), who will present them with a certificate of good citizenship. Nir Distelfeld, who runs the IAA’s theft prevention unit in the North, emphasized the importance of such real-time reporting, and the fact that it’s imperative that the artifacts aren’t dug up or moved. Their positioning can be a vital factor in providing archaeologists with information as to their dating and history.

IAA archaeologist Dr. Walid Atras has dated the jar to the sixth or seventh century. Massive storage jars such as these were generally used to store grain and legumes. Remains found in the Beth Shean National Park, which includes the ancient city of Beth Shean and the Harod Stream, date from as early as the fifteenth century BCE, when the site was conquered by Egypt and became a major administrative center. Taken over by Philistine invaders at the end of the twelfth century BCE, the city is mentioned in the Bible as the town from whose walls the Philistines hung the body of the first Israelite king, Saul, and was destroyed in the Assyrian invasion of King Tiglat Pilessar III, when the ten tribes living in the northern kingdom of Israel were exiled. A city named Scythopolis was established on the site in the Hellenist period, and continued to grow and develop in the Roman and Byzantine eras. After the Arab conquest of the Holy Land, Beth Shean went into decline until its destruction in the Seventh Earthquake – a seismic event that shook the area in the mid-eighth century CE. Consequently, the site was reduced to a village until Crusader times.

The two families presented the jar to the national department of state treasures.