“This is a very rare find, a gold coin minted in Constantinople (today’s Istanbul) by Theodosius II, around 420-423 CE. This coin is indeed known in the eastern part of the Byzantine Empire, but this is the first time that a coin of this type has been discovered in the Land of Israel.“

The coin depicts Victoria, the Roman goddess of victory holding a large cross. On the other side is the portrait of Theodosius II.

The goddess Victoria holding a cross

In 408, Theodosius’ father died and the seven-year-old boy became Emperor of the Eastern half of the Roman Empire, but until his adulthood his guardian ruled in his name, and later his older sister Pulcheria. Theodosius did not appoint a president to the Sanhedrin (the Assembly of Rabbis in Eretz Yisrael) after the death of Rabban Gamliel VI in the year 425 CE, and thus ended the existence of the Sanhedrin in Eretz Yisrael. Under the influence of his sister, who was very hostile to Jews and pagans, Theodosius enacted laws prohibiting the transfer of donations to Jewish institutions and the construction of synagogues. His sister Pulcheria supported the riots of the Christians in the cities of the empire against Jewish and pagan citizens, and her animosity eventually led to the expulsion of the Jews of Alexandria and the looting of their property.

Theodosius initiated the collection, editing and compilation of the laws of the empire in 438 CE, known as the Codex Theodosianus, which was also accepted by the Roman Senate in the West. The Codex included laws and rules regarding public affairs, civil leadership and law, as well as criminal law and religious legislation. Theodosius is also considered as the founder of the University of Constantinople. 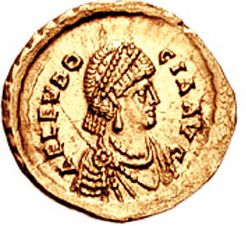 Portrait of Eudocia on a gold coin from Constantinople, 5th century

In contrast to his sister, Theodosius’ wife, Aelia Eudocia, is remembered for her kindness to the Jews: When she lived in Jerusalem at the end of her life, Eudocia initiated the construction of the Jerusalem walls, which had been in ruins for centuries , since the destruction of the Second Temple in 70 CE. The Eudocia Wall stood for more than 580 years, until it collapsed in the devastating earthquake of 1033.