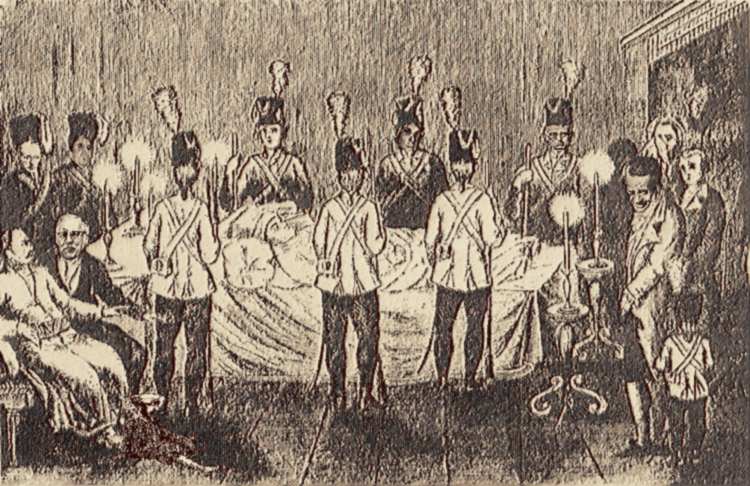 Frank, a follower of the false Messiah Shabbetai Zvi, had begun his own movement which emphasized the Kabbalah and denigrated the Talmud. His practices (some of which were of a licentious sexual nature) were condemned by the local rabbinate of Landskorn, Poland, where their practices were exposed, and he and his followers were chased out of the region by the Jewish community of Podolia, and excommunicated by a rabbinical court in Brody. Frank found refuge in the  town of Kamianets, where Bishop Nicholas Dembowski took him under his wing. To take revenge, Frank arranged a dispute in Lvov between himself and the local Jewish leaders – a trial of the Talmud, presided over by Bishop Dembowski, who ruled in favor of Frank and ordered all copies of the Talmud found to be dragged through the streets and burned. Around 1000 copies of the Talmud were destroyed. Frank converted to Christianity in Warsaw with the king of Poland as his godfather on September 18 1759, and his example was followed by thousands of Frankists.

Frank and his followers were barely tolerated by the Polish establishment however, both because of their strange ritual practices and Frank’s self-declaration that he was the Messiah, making his cult heretical to Christianity. He was arrested and imprisoned, holding court in his jail much like Shabbetai Zvi had, only to be freed after the partition of Poland. He attempted to re-establish his sect in various locations in Austria and then Germany, eventually settling in Offenbach, adopting the title of Baron Offenbach and living in lordly style until his death in 1790. His daughter Rachel (Christian name Eva) inherited his role as leader of the cult, with considerably less success.