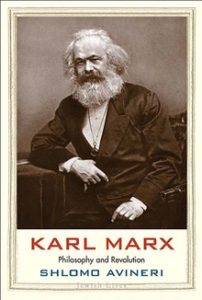 A world expert on Marx, Shlomo Avineri brings over sixty years of study and teaching to this monograph. True to the brief of Yale University’s Jewish Lives series, Avineri highlights the Jewish aspects of Marx, which the thinker himself barely acknowledged. Fairly early in his career, Marx ostensibly addressed the nature and political status of the Jews, but Avineri claims his subject used the term Jew only to elude the German censor when criticizing the “parasitism” of the bourgeoisie. Certainly, Marx nowhere identified outright with the Jewish people.

In the book’s final chapter, however, Avineri quotes an obscure article in which Marx – then the London correspondent for a New York newspaper – explains the political background to the Crimean War, including the power struggles within the Church of the Holy Sepulchre. In this context, he poignantly describes Jerusalem’s Jewish majority and its miserable conditions. Avineri may well be accused of clutching at straws to locate a Jewish consciousness in Marx. Nevertheless, a similar sympathy characterizes Marx’s much-maligned dismissal of religion as the opium of the people. Avineri points out that a sentence earlier, Marx calls religion “the sigh of the oppressed creature, the heart of a heartless world”:

Empathy, not scorn, for the suffering religious human being is what comes through very clearly here: religion is […] a protest against this suffering. (p. 39)

The author contends that Marx couldn’t have grown up with no Jewish identity, as it so severely affected his family. Emancipated by Napoleon’s conquest of Alsace-Lorraine, Marx’s father seized the opportunity to work as an attorney, only to be barred from the profession after his hometown once again became German territory. Conversion to Christianity was the only way to secure a livelihood, but Henry Marx continued living near his extended family. He even provided legal representation for his community, his brother being the cantor. Yet Karl seems to have had an uneasy relationship with his father, finding a mentor in the Prussian civil servant who later became his father-in-law.

The only ethnicity to which Marx ever professed – and jokingly at that – lay in referring to himself as “the Moor,” a nickname based on his swarthy complexion.

Avineri’s Marx is nuanced as much by his biography as by his writings. Analyst and critic of capitalism, he nonetheless struggled to provide his family with bourgeois security and comforts. While refraining from attributing The Communist Manifesto to Engels rather than Marx, the author emphasizes that it was published just weeks before France’s 1848 revolution but – for all its proletarian rhetoric – didn’t see the cataclysm coming. Marx subsequently spent years analyzing the circumstances and failure of the rebellion he missed.

Avneri clearly likes Marx – his foibles as well as his profundity. The biographer cuts through his subject’s lengthy, complex, and sometimes even contradictory prose, distilling its underlying theory of man’s alienation from the work of his hands by the commercialization of labor in far simpler terms than the writer himself. At the same time, Avineri readily absolves Marx of guilt for the sins his Manifesto was used to justify – in Bolshevik Russia and Mao’s China, to name only the most egregious examples. The redeemer of the proletariat, as Avineri reminds us, was first and foremost a product of the ivory tower, rubbing shoulders with intellectual exiles and politicians but not with the working man. Perhaps the most telling fact with which this scholar of Marxism leaves us is the number who attended Marx’s funeral and actually heard the eulogy that Engels later published all over the world: a mere eleven. 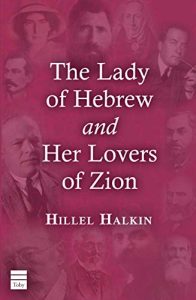 The Lady of Hebrew and Her Lovers of Zion

This labor of love by Hillel Halkin traces the development of Hebrew within the Jewish Enlightenment (Haskala) and early Zionism. Halkin combines his love of poetry and his translating skill to provide a polished sampling of the styles and genres honed by various writers, starting with Joseph Perl and the birth of the Hebrew novel. The author follows recent academic trends in slaying such sacred cows as the contention that Abraham Mapu’s biblically resonant narratives first revived Hebrew as literature. Halkin suggests that Perl’s works, which predated Mapu, were overlooked partly due to the vibrancy of Perl’s Yiddish-inspired colloquial Hebrew and his biting satire of Hasidic Jewry. If, Halkin speculates, the characters of Hebrew literature were to be so close to home – so corrupt, so primitive, so Yiddish – why revive it? Mapu’s noble if stilted heroes and heroines, speaking pure biblical Hebrew, seemed perhaps worthier of investment.

Crowned national poet laureate while still in his thirties, Hayyim Nahman Bialik also suffers reevaluation at Halkin’s hands. Echoing the most senior figure in Israeli literary academia, Dan Miron, Halkin attributes Bialik’s accolades first and foremost to the Jewish public’s thirst to bestow them somewhere – almost anywhere. Like Miron, Halkin prefers Bialik’s lyrical compositions on nature (“The Pond” is dissected in detail) to his epic verse. “In the City of Slaughter” is too much of a polemic against the helplessness of God and the cowering males of His chosen people to ring true, the author complains; Bialik’s condemnations sweep the self-defense attempts in Kishinev and elsewhere under the rug. Halkin also makes much of the suggestion hinted at by Bialik’s erstwhile paramour, Ira Jan, that the poet suppressed his own muse when he denied passion in favor of barren mediocrity. Overall, concludes Halkin, Bialik’s greatest and most enduring achievement wasn’t his poetry, but rather his redaction of the Jewish bookshelf, from the poets of Andalusia to the aggadic gems of the Talmud. .

Other chapters highlight Mendele Mokher Seforim and Yosef Hayyim Brenner, focusing on the Zionist ambivalence of early Hebrew writers, and include a tremendously poignant essay on the poetry and personality of Rahel Bluwstein (Bluvshtayn in Halkin’s carefully literal spelling) and another on S. Y. Agnon, both luminaries of the Haskala and the second wave of Zionist immigration. 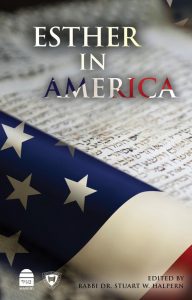 Edited by Yeshiva University’s Rabbi Dr. Stuart Halpern, this collection of essays by accomplished Jewish academics provides a new perspective on the book of Esther, looking at the surprisingly many and often contradictory ways it’s been used in American history and culture. Whereas abolitionism’s adoption of the Exodus narrative seems obvious, the story of Esther – a Jewess infiltrating the Persian elite in order to enable her own minority group to massacre its enemies – is ostensibly both politically incorrect and morally problematic. Yet Americans have invoked this queen as a role model since their very beginnings. From scholars such as Puritan pastor Cotton Mather and his depiction of Esther as the perfect wife, nudging her husband toward a better path, to unlettered black women like Sojourner Truth, channeling the Persian queen as she risks her life by speaking up for her people’s survival, this biblical book of palace intrigue has captivated the land of the free.

Unexpected asides enrich Esther in America, as when Erica Brown notes that anti-apartheid activists have deplored the tale as a counterexample of an oppressed people’s struggle, whereas black slaves in America were inspired by its heroine as both a woman and a member of God’s people under threat. Israel Ben Porat highlights Puritan dissident Roger Williams’ learned comparisons between the chronicles of Esther and Nehemiah, identifying the monarchs of both as Artaxerxes. The juxtaposition is used to justify state intervention in religion –not only a fascinating conclusion but an apt reminder of how easily yesterday’s persecuted (English Puritans) can become today’s bigots (expelling anyone who disagrees with their religious sentiments).

Esther in America showcases refreshing and original approaches to the Esther story. The most striking is a chapter on Esther in American art, but others include parallels between the megilla and modern political dramas involving America and Israel (the modern equivalent of the scroll’s tensions between Persians and Jews) as well as the White Houses of Lincoln, Reagan, and Truman. A later section examines how prominent American Jewish leaders – Rabbi Joseph B. Soloveichik, Rabbi Menachem Mendel Schneerson (the last Lubavitcher Rebbe), and the recently deceased Rabbi Norman Lamm – have interpreted the book. All the above are worthy challenges, if sometimes a little uneven.

The Esther narrative obviously lends itself easily to an ultra-contemporary feminist reading, but two essays in this vein stand out.

Shaina Trapedo discusses the Esther aesthetic – how attractive was she? – and early-20th-century beauty pageants held on Purim, highlighting the tension between a subjective, culturally defined standard of female good looks and the concept of hein, inner beauty. Examining the Purim play and beauty pageant as a reflection of Jewish communities’ adoption of American norms, Trapedo attributes this phenomenon’s relatively short life to its displacement by feminism on the one hand and a religious backlash on the other.
Malka Fleischmann’s powerful meditation on Esther and the healing power of “me-tooism,” silence and speech, and women’s oppression and liberation in the megilla is both textually authentic and sadly relevant in our contemporary, supposedly enlightened society.

Like the book of Esther itself, this rich pageant of thought and interpretation is worth savoring well after Purim is over. 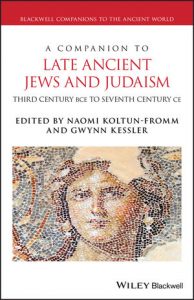 An important addition to the academic bookshelf, this Companion is an extensive introduction to its subject, with each chapter written by a leading scholar. Though the work is currently priced beyond the reach of the ordinary reader, a more affordable paperback version will be available soon.

One highlight is Ross S. Kraemer’s discussion of where Jews lived in the Roman Empire, contesting current attempts to diminish their presence. Kraemer marshals a wealth of data demonstrating a significant Jewish representation throughout the Mediterranean. The map accompanying this essay is a welcome addition, indicating many settlements in which traces of Jews and synagogues were found.

Natalie B. Dohrmann’s contribution is also of great interest, dealing with Jewish law not as a monolithic code of practice (as it is often misconstrued by those less familiar with the mosaic of Jewish ethnicities and sectors) but as a diverse collection of concepts, customs, and traditions. As Dohrmann states, “Observance of said norms, it must be stressed, did as much to divide Jewish groups from one another as it did to assert Jewish identity collectively in the face of a non-Jewish world” (p. 283).

The chapter on the Jews of the Hijaz and the kingdom of Himyar is probably the most obscure, examining the origins of Arabian Jewry. Aaron W. Hughes claims that this community was composed of a minority of Jewish exiles and a majority of converts from Arab tribes. In the case of Himyar, which at its height ruled most of Arabia, there is plenty of evidence of conversion to Judaism in the late fourth century CE. The Himyarite elite may have embraced Judaism in response to the conversion of their great rivals, the Ethiopian kingdom of Axum, to a Monophysite version of Christianity.

This book repeatedly argues that the Judaism of late antiquity was diverse, with most Jews rejected the rabbinic sect. As Hughes writes about the Himyarite Jewish community, “these Arabian Jews teach us to be cautious of assuming an orthodoxy of stable Jewish identity and practice based upon what the rabbinic academies of Babylonia were producing at this time” (p. 293).

Therefore, these experts contend, ancient Judaism should be approached with open eyes.