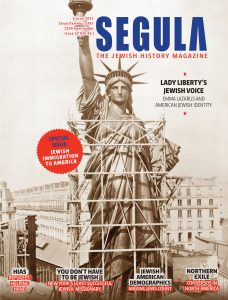 The Hebrew Immigrant Aid Society shepherded bewildered Jews through the U.S. immigration process, from their first steps on Ellis Island through English classes and citizenship exams. But what role could the organization play when no Jewish refugees remained? // Gur Alroi

What better way to persuade Jews to join you than to promise them a greater role than anyone else? And who better to do it than a seasoned trickster and converted Jew? The rise and fall of Leopold Cohen and his mission to bring Jews to Jesus // Menachem Keren-Kratz

Where will the majority of world Jewry soon reside – America or Israel? It depends on how you define Jewish identity – by birth, behavior, or belief // Michelle Shain

This Month in History – Sivan

A Day at the Museum – ANU Museum of Jewish Peoplehood

Portrait of a People – George Bellows