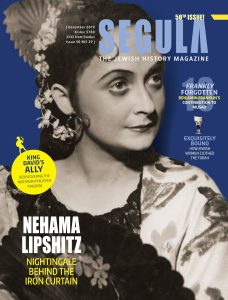 Israel’s USSR Liaison Bureau saw Nehama Lipshitz as its one-man “Light Music Department,” broadcasting directly to the heart of Russian Jewry. Ditching a Lithuanian opera career to perform in Hebrew and Yiddish, she built a musical bridge from Babi Yar to Jerusalem – right under the KGB’s nose            continue reading

A Brief History of Russian Dissidents

Though traditionally neither seen nor heard in synagogue, Jewish women have long expressed their religious devotion in exquisite needlework, from the draperies of the Tabernacle to the embroidered mantles and binders of Torah scrolls

Were the northern Philistines of Syria less aggressive than their cousins on Israel’s coastal plain, or was their cooperation with King David dictated by a common foe? And could an alliance with their king have been the key to David’s success? // Gershon Galil

Benjamin Franklin worked hard to refine his character, but it took a Polish rabbi to turn the founding father’s method into a book. This volume became one of the texts used by the Lithuanian Musar movement – but its origins have been consistently overlooked

(Also available as podcast!) Read it!