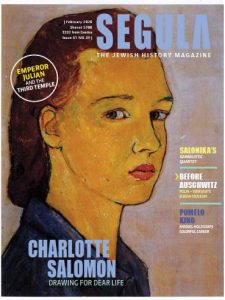 At the Ottoman Empire’s western gate, four kabbalists – Solomon Molkho and rabbis Yosef Taitazak, Yosef Karo, and Shlomo Alkabetz – gathered to usher in Israel’s redemption, each in his own way // Roee Horen

Suicide was dangerously contagious in Charlotte Salomon’s family, but as the Germans pursued her from Berlin to the French Riviera, she chose life, both growing within her and immortalized in a great creative spurt of art // Yemima Hovav

Though Jews still await the Third Temple, its construction actually began in the fourth century CE. Julian the Apostate, the Roman emperor Christians would rather forget, sought to restore the Temple to its former glory – and Rome to its pagan heyday // Haggai Olshanetsky

Samuel Holzman’s parents in Jerusalem’s Old City hoped to make a rabbi of the son they sent to America, but what they got was a gold prospector, ostrich farmer, and botanical innovator – and the father of the Etzion Bloc // Tamar Hayardeni

Jews have been an integral part of Polish history, but in telling their story, Warsaw’s POLIN Jewish museum clashes with the Poles’ preferred narrative // Katarzyna Czerwonogóra

A Brief History of Salonika

Voices of the Past

Picking Up the Pieces: Rebuilding Thessalonika

After Greece was liberated from the Nazis, the shattered remnants of Greek Jewry struggled to rebuild. Alfred Cohen was a pillar of the Thessaloniki Jewish community, and his personal archive brings its hardships vividly to life // Denise Rein