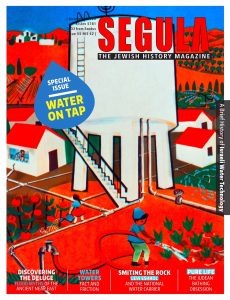 Going with the Flow

Levi Eshkol may not have been the greatest orator in Israeli history, but his masterful management of the country’s scant water sources facilitated Zionist settlement and made the Negev desert bloom // Arnon Lammfromm

During the late Second Temple period, Jerusalem numbered more mikva’ot than necessary for its population and even its pilgrims. Why so many, and so close to the Temple? Could a bath have been the passage to a sacred state of mind? // Eyal Regev

Reaching for the Sky

How does a piece of hydraulic engineering become a national icon? Water towers made Zionist dreams reality and allowed thirsty and isolated kibbutzim to survive under siege. These structures’ soaring height made them ideal hosts for the most outrageous artistic statements – in short, a crazy combination of clumsy practicality and retro charm // Tehila Bigman

Overwhelmed by the biblical echoes he found while deciphering cuneiform inscriptions from the ruins of Mesopotamia, a British archaeologist danced naked in the offices of the British Museum. Meet George Smith and the Babylonian Noah // Uri Gabbay

The Ballad of the Half-Full Cup // Anat Hoffman

This Month in History – Tevet

Critics – Next Year in Marienbad