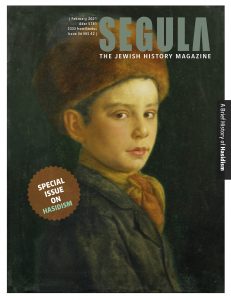 Hasidism emerged with unexpected success at the dawn of modernity thanks to Rabbi Israel Baal Shem Tov’s skillful fusion of folk wisdom and religious ecstasy. He subtly wove innovation into the fabric of Jewish tradition, creating a way of life at once old and new \\ Roi Horen

What happens when the heir to a Hasidic dynasty is still a child? Such succession stories have sometimes made a laughingstock of Hasidism and often sparked bitter power struggles and divisions. Yet the innocence of childhood also lent these young leaders an aura of sanctity that only strengthened their loyal followers // Gadi Sagiv

Out of the Depths

Ever since the first Lubavitcher Rebbe was released from a Russian jail after false charges of treason, Lubavitch Hasidim have attached profound theological significance to their various leaders’ imprisonment and release, still celebrating the latter to this day \\ Netanel Lederberg

Steam-powered train travel was synonymous with modernity and change, yet the ostensibly conservative Hasidic movement eagerly climbed aboard. Tradition on track // Ze’ev Kitses

Despite its current secular reputation, Tel Aviv was once the Hasidic capital of  the holy land \\ Menahem Keren-Kratz

This Month in History – Adar

A Brief History of Hasidism

Tale of a Trail – Hamat Gader