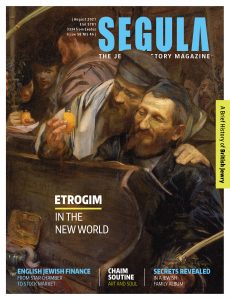 The gold seized by the king of England from his wealthiest subject’s bequest may have sunk in the English Channel, but the system built to track sums owed to Aaron of Lincoln and other Jews survives to this day // Jonathan Myers

Whose Land Is It Anyway?

A minor piece of British legislation allowing a few Jews to be naturalized provoked national hysteria, including fears of nationwide circumcision. What were the English really afraid of, and why was it associated with Jews? // Avinoam Yuval-Naeh

When Etrogim Grew on Trees

Apart from being among the four species waved on Sukkot, what good are citrons? Etrog prices plummeted in America when candied citron peel was a popular snack, only to soar anew with the advent of chewing gum and chocolate bars // Jonathan Sarna and Zev Eleff

Lost between the Covers

Every family photo album that survived the Holocaust is a rare gift, yielding its secrets slowly and grudgingly to careful research. European fashions, studio portraits,  and Zionist activism through a 19th-century photographic lens // Michele Klein and Alon Ginzberg

Buried beneath a cross in a Paris graveyard, artist Chaim Soutine was as much a contradiction in death as he had been in life. The master who mutilated his own canvases influenced a generation of exiled artists, particularly in the young State of Israel // Susan Nashman Fraiman