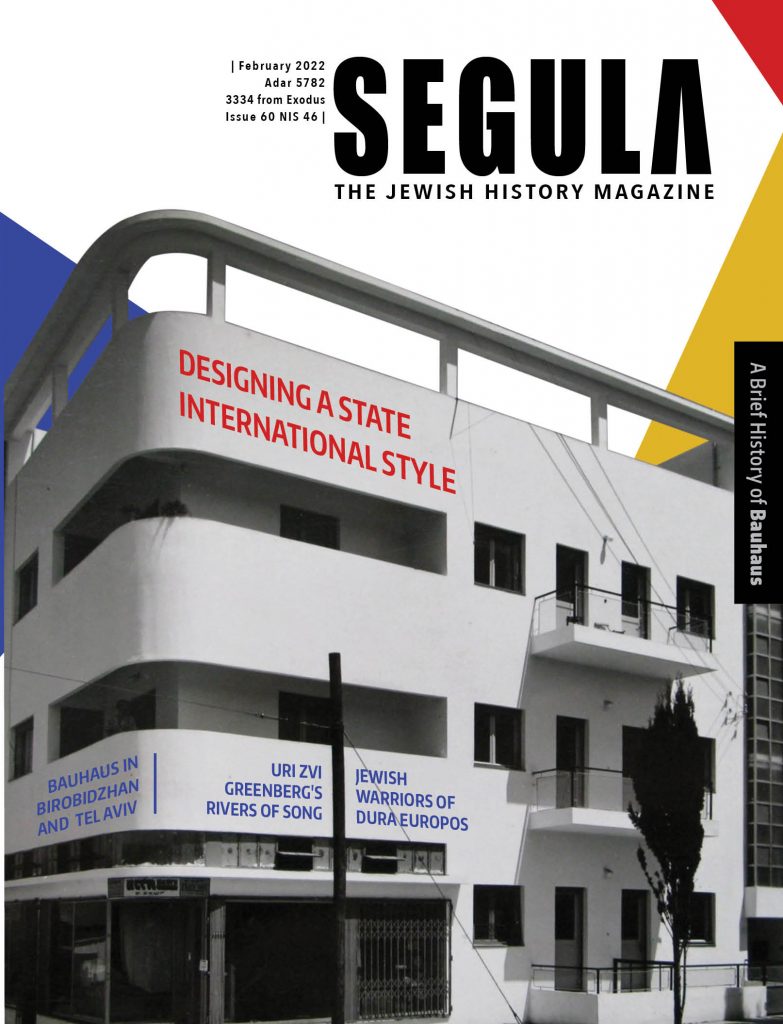 How do you build a homeland for Western Jews in the malodorous Middle East? Zionist leaders did so by abandoning Oriental influences for the ultra-modern International School of architecture, with its clean lines and shiningly hygienic white plaster // Tamar Hayardeni

Stalin thought he’d kill two birds with one stone by establishing a Jewish Autonomous Region in Russia’s frozen Far East. Jewish architects from Germany flocked to design the JAR’s capital in Birobidzhan, but the dream shattered when the dictator changed his mind // Ber Kotlerman

Uri Zvi Greenberg was a poet, not a prophet, yet he anticipated both the 1929 Arab riots and the horrors of the Holocaust. Seventeen volumes of Greenberg’s poetry have been published in Hebrew and Yiddish, so how is his work still relatively unknown? // Akiva Goldstein

Syria has long been a battleground, but in the third century, its conflicts fleetingly served to preserve the wonders of the past rather than destroy them. What can the vivid murals of the country’s Dura-Europos synagogue tell us about the Jews who prayed there? // Haggai Olshanetsky

Synagogue art in the late Roman period included the zodiac, animals, and even the sun god. Did these images reflect strange, syncretic trends within Judaism or just the same tension between what rabbis say and what people do that exists today? // Haggai Misgav

A love match between a Jewish girl and a German Catholic survived a year’s separation but not the Nuremberg Laws – or had the relationship already soured before legislation tore it apart? // Janne Moehring