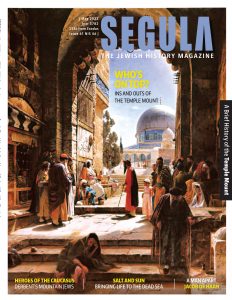 Ascending through the Ages

Throughout history, Jews have ascended the Temple Mount, defying bans and even sharing the holy space with early Muslims. This tradition couldn’t be farther removed from most Jews’ alienation from the site today \\ Meir Loewenberg

Which is holier – the Western Wall or the Temple Mount? Over the last century, secular and Orthodox Jews have switched sides on the issue. Fears of provoking Arab nationalism have deterred previously eager secular Jewish tourists from the mount while challenging the observant to boldly go where few Jews have gone before \\ Dotan Goren

Holding Fast in the Gateway

Sheltering in the Caspian seaport of Derbent, the mountain Jews of the Caucasus earned a reputation for tenacity as well as commercial skill. Heroic tales of struggle and survival against Ottomans, Nazis, and Communists echo in the empty houses most of this Jewish community has left behind \\ Ben Shragge

Murder in the Holy City

Why would an ultra-Orthodox rabbi in London eulogize an anti-Zionist Dutch poet whose demise others preferred to ignore? Joseph Shapotnick shared more than might be expected with Jacob de Haan, including admiration for the charismatic leader of Jerusalem’s separatist Jews \\ Pini Dunner

The stirring story of a Zionist endeavor established against all odds, granting the Dead Sea a new lease on life \\ Tamar Hayardeni

This Month in History – Iyar

Portrait of a People – Shalom Koboshvili