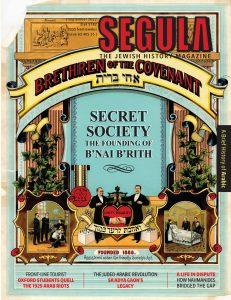 An outsider to the highly pedigreed leadership of the Babylonian Jewish
community, Sa‘adya Gaon transformed the Talmudic curriculum,
introducing not only new genres but a new language of Jewish scholarship:
Arabic \\ Miriam Goldstein

No stranger to controversy, the great medieval commentator Nahmanides
took up the cudgels against intellectuals of all kinds – whether his
predecessors or contemporaries, fellow Jews or apostates. But when
forced to choose between Maimonides and his opponents, between
religious schism and dogma, Nahmanides reacted with uncharacteristic
forbearance \\ Oded Yisraeli

B’nai B’rith was born when Jews found themselves excluded from Masonic
lodges but determined to make the world a better place. The chapter
founded by Jaffa’s small Jewish minority did just that, founding and
supporting kindergartens, libraries, and even Tel Aviv \\ Ilan Shchori

Tourists on the Battlefield

They were Oxford divinity students touring the Holy Land, but when Arab
riots took the British by surprise in August 1929, these young men took up
arms to help the empire and its police protect the unarmed victims. Dennis
Gilmore’s diary tells the tale \\ Glenda M. Woolf

What lies below the massive stonework protecting the patriarchs’ tombs in
Hebron? Generations of amateur archaeologists have probed the mystery
with little or no success \\ Tamar Hayardeni