An ancient rural mosque without walls, one of the earliest such known in the world, has been discovered in the town of Rahat in the Negev. The remains of this rare building were discovered by the Israel Antiquities Authority during preparatory earthworks for a new neighborhood in the town of Rahat, in a rescue dig run in collaboration with Bedouin residents and youth groups

Dr. Jon Seligman and Shahar Zur, directors of the excavations for the Israel Antiquities Authority, remarked: 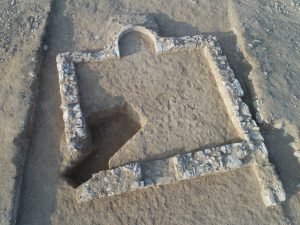 Aerial view of the mosque

“A small rural mosque, dated to the 7th to 8th centuries C.E.,  is a rare finding anywhere in the world, especially in the area north of Be’er Sheba, where no similar building has previously been discovered. From this period there are large known mosques in Jerusalem and in Mecca, but here we have evidence of an ancient house of prayer, which seems to have served the farmers who lived in the area. We found remains of an open-air mosque – a rectangular building with a “Mihrab” – a prayer niche – facing south, towards Mecca.”

Bedouin residents of the area, as well as youth from the local villages and towns, participated in the excavation, including Israelis from Meitar, Giv’ot Bar and Beit Kamah. The joint dig is part of the IAA’s Legacy Project, which allows organized youth groups to help with the excavations during the summer vacation. Young people earn a fair wage, engage with the past, and gain experiences that will last a lifetime.

Youth participating in the excavations

“This is one of the earliest mosques known dating from soon after Islam’s arrival in Israel, after the Arab conquest of 636 C.E. The discovery of a mosque near an agricultural settlement between Be’er Sheva and Ashkelon also indicates the processes of cultural and religious change which the country underwent during the transition from the Byzantine to the early Islamic period. The discovery of the village and the mosque in its vicinity are a significant contribution to the study of the history of the country during this turbulent period. According to historical Islamic sources, the new Islamic regime distributed plots of land to its senior officials, including Amr ibn al-‘As, an Arab military commander who conquered Israel and Syria. The continued excavations on the site will perhaps provide answers to the questions regarding the foundation of the settlement and the nearby mosque, and its connection to the Arab conquerors of Israel.”

Currently, the Authority for Development and Settlement of the Bedouins in the Negev and the Israel Antiquities Authority are examining possible ways in which this the ancient outdoor mosque can be integrated into the city’s new neighborhood.